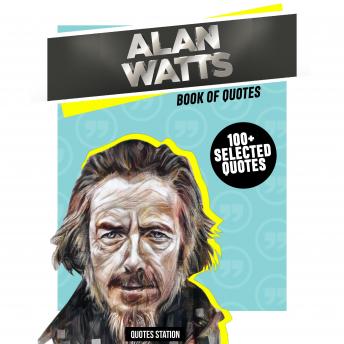 Alan Wilson Watts (6 January 1915 – 16 November 1973) was a British philosopher, writer and speaker known for interpreting and popularising Buddhism, Taoism, and Hinduism for a Western audience. Born in Chislehurst, England, he moved to the United States in 1938 and began Zen training in New York. He received a master's degree in theology from Seabury-Western Theological Seminary and became an Episcopal priest in 1945. He left the ministry in 1950 and moved to California, where he joined the faculty of the American Academy of Asian Studies.


“This is the real secret of life. To be completely engaged with what you are doing in the here and now. And instead of calling it work, realize it is play.”


“No amount of anxiety makes any difference to anything that is going to happen.”

“People sometimes fail to live because they are always preparing to live.”

“Hospitals should be arranged in such a way as to make being sick an interesting experience. One learns a great deal sometimes from being sick.”